Pitched roofs have, for centuries, been leveraged in residential and commercial architecture throughout Europe and the United States for a relatively simple reason: They’re practical. Pitched roofs serve to divert rainflow and prevent snow accumulation, making them an ideal roof style in locales that regularly see that type of weather.

Because of this long history, pitched roofs are often considered to be a more “traditional” style of roof. Pair that with the fact that modern home design will often forego a pitched roof in a locale where it isn’t necessary due to the weather, and we have a perception that a pitched roof cannot be modern.

But the truth is that even a traditional shape and design feature, such as a pitched roof, can be leveraged in a modern, surprising way. Whether you are in a location that requires this style of roof due to the weather, or you’re simply looking for something that is different, there are most certainly ways of designing a beautiful modern home with a pitched roof.

Below are six examples of modern homes featuring pitched roofs, which can serve as inspiration for your home design project.

In the Flower Residence, the pitched roof serves multiple purposes. On a practical level, it serves to unify the different programs of the home by spanning across the different sections of the house. 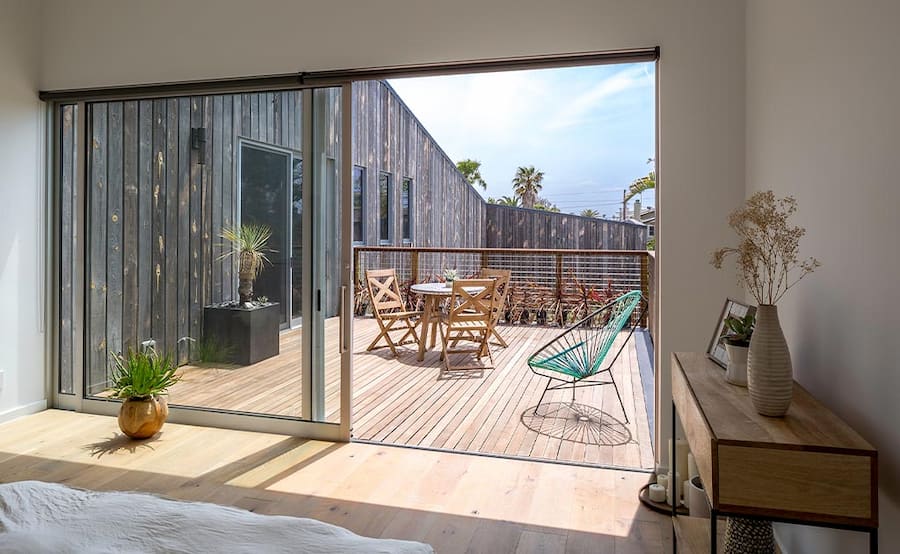 From a design perspective, there’s also a lot to consider. The material choice and pitch allows the roof to become a part of the structure’s facade, while also serving something of a sculptural role. This sculptural quality is especially poignant inside the home, where the pitch is mirrored. In some locations, the ceiling is clad in wooden planks that run in divergent angles but meet at the pitch, making for a visually interesting and unexpected quality.

Though the roof of the Sluice Point House is pitched, it is at a much shallower pitch than is typically expected. 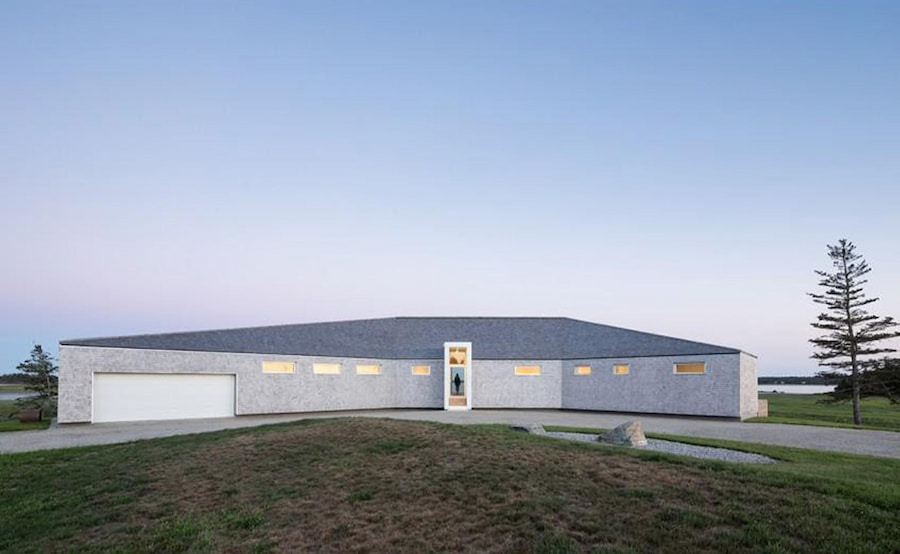 The effect of this, paired with the darker coloring of the roof compared to the walls, is that it seems almost as though the roof is compressing the home into the landscape, like a heavy slab of concrete placed on top of it. In addition to being surprising and beautiful in an understated kind of way, keeping the roof low also serves to open up the horizon.

The Caring Wood House is similar to the Sluice Point House in that both roofs appear heavy. 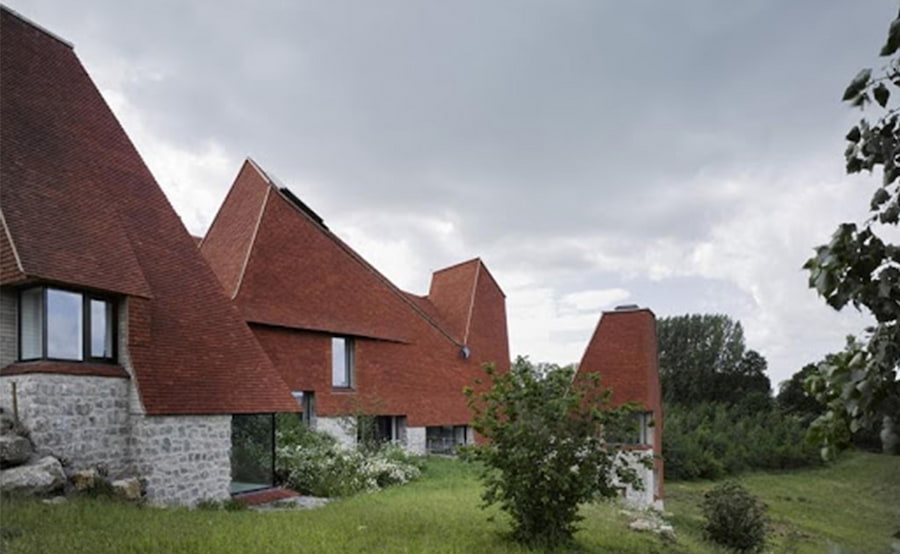 But whereas the Sluice Point House achieves this by pairing a slender shape with a dark color, the Caring Wood House achieves this by going in the opposite direction and featuring a rather large roof. In fact, you ultimately see more of the roof than you do the walls of the home. Additionally, atypical roof shapes become something like sculptures in the landscape.

The roof of the Amoroso Studio is pitched at multiple different angles that dare to break the idea of what a pitched roof can be. These angles, paired with zinc shingles in three different colors, introduce a sense of movement and also make the home as a whole feel very sculptural in nature. 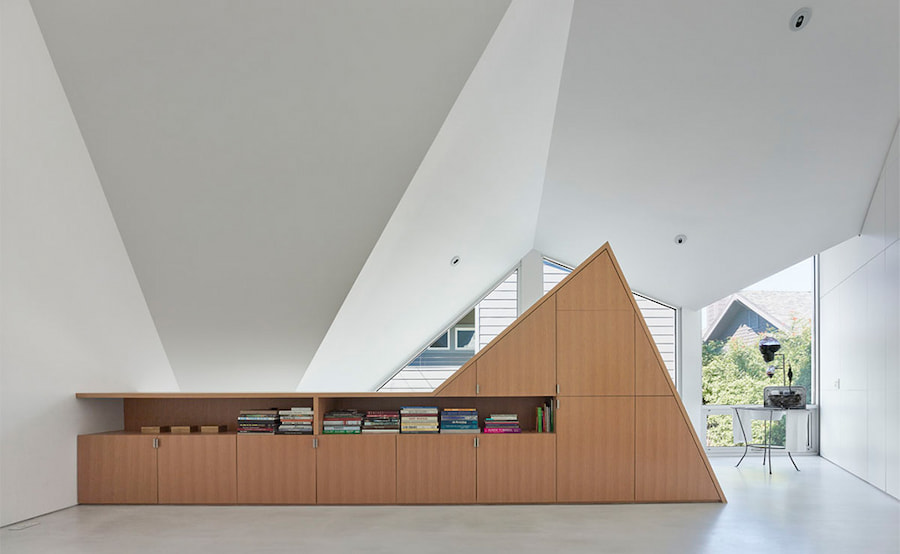 The angles of the roof are echoed in other elements as well. The windows, for example, are custom made to meet the peaks and valleys that the roof creates; likewise, the ceiling is multifaceted and creates multiple interesting focal points throughout the interior of the house. 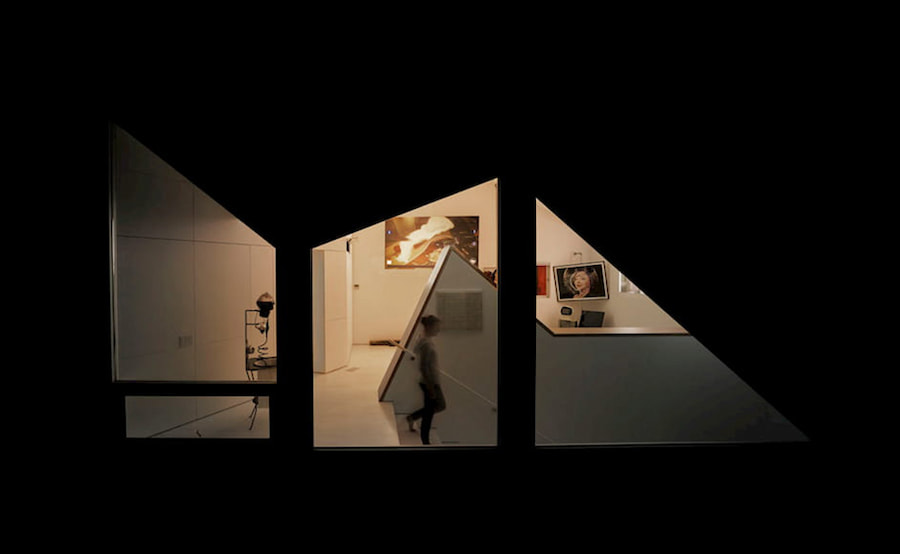 5. House of the Woodlands

The House of the Woodlands is an interesting example of a pitched roof approached from a modern perspective in how it distills the idea of a hip roof into the simplest possible form. 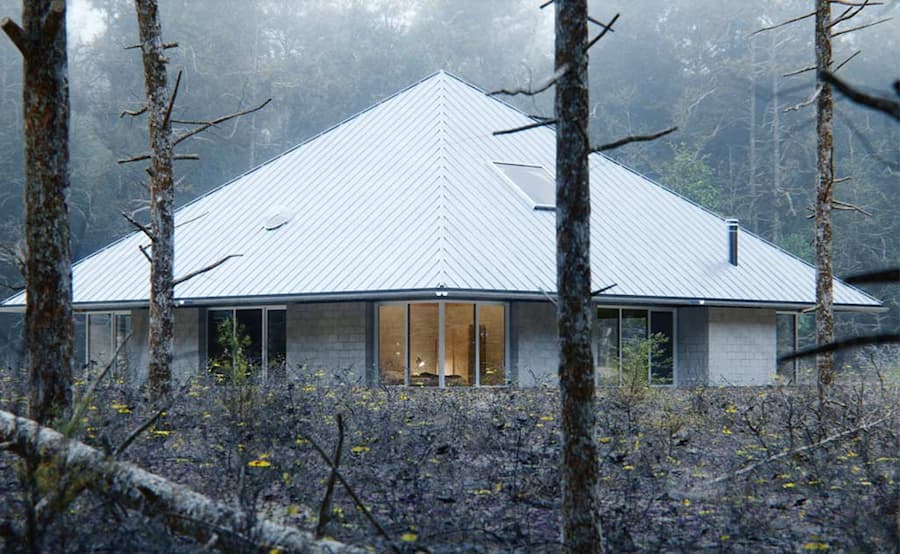 The entire program of the home is unified under a single roof shape. Due to this simple form and strong, clear lines, the roof dominates the design of the home and becomes its greatest defining feature, at least when viewed from the exterior.

The Baron House is in many ways similar to the example above. By leveraging pure shapes, minimal detailing, and relatively simple materials for both the home and walls, this traditional roof style has taken on a truly modern approach.

Pairing the strong, sharp, triangular design of the roof with expansive rectangular windows also lends itself to a sort of geometric minimalism which is often indicative of a modern design.

Though the pitched roof may have a reputation as a “traditional” style and design element, when approached from a new perspective it is possible to leverage it in surprising and modern ways. In this way, what may otherwise have been overlooked as a “minor” detail of the home can become a defining characteristic that works toward the goals guiding your project.