Of all the “modern” design categories, mid-century modern is the best known and most emulated. It’s no wonder, since mid-century design’s characteristically clean lines, ample and oversized windows, open floor plans, and honest use of materials took hold at a time in history when the way we lived, traveled, and interacted were being revolutionized. Mid-century modern encapsulated “the future,” so much so that its influence traveled well beyond architecture into graphic and industrial design and interiors.

Today the lines of what qualifies as mid-century modern get awfully blurry. In truth, this design movement evolved during a specific post-WWII time frame: 1945-1969. It was an outgrowth of the International and Bauhaus design movements of twentieth-century teens, twenties, and thirties.

Mid-century modern’s enduring philosophies and qualities are sought after today, and are reflected in homes that follow a modern aesthetic as well as traditional looks. In much of California, with our temperate weather and abundant native plant varieties, mid-century modern traits such as ample windows and integration with nature have almost become the norm.

Beyond the well-documented Frank Lloyd Wright Fallingwater House in Mill Run, Pennsylvania, Pierre Koenig Stahl House (Case Study House #22) in Los Angeles, or Richard Neutra’s Kaufmann House in Palm Springs, there is a treasure trove of other mid-century specimens that offer unique inspiration for modern living. We’ve covered 5 such gems here, as a way of expanding the traditional thinking of what mid-century modern is, and also the ways that it can be integrated into designs today. 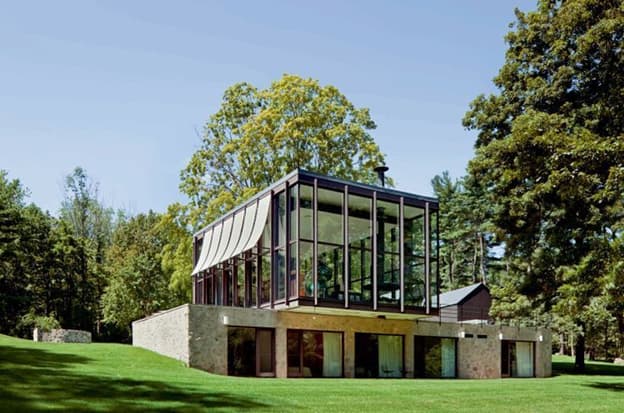 The Wiley House, built in 1953 is a Philip Johnson home in New Canaan, Connecticut that is often overshadowed by his most famous work, the Glass House. It’s a shame, because the material honesty and connection to nature can serve as a model for any contemporary or modern home today.

The home is a singular structure with a stone and concrete base that supports a cantilevered glass pavilion above. Public spaces in the upper-level glass box insert people directly into the landscape while private bedrooms are grounded, surrounded by earth on three sides and encased in stone. 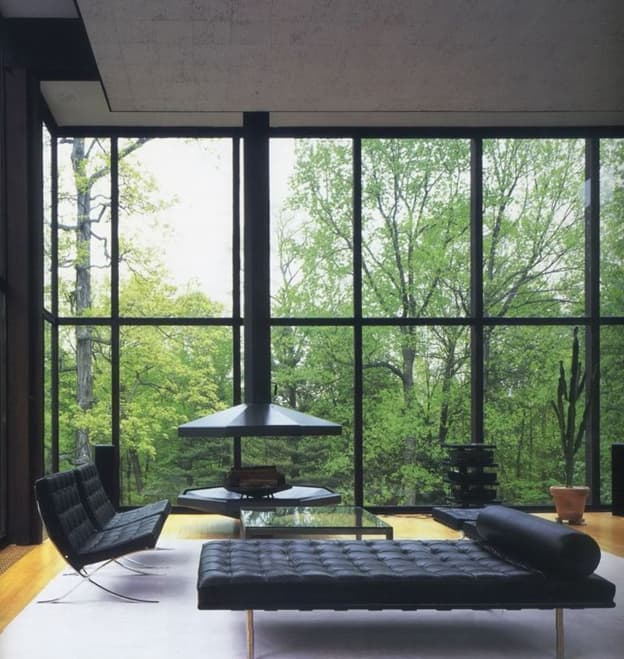 This house employs an incredibly minimalist aesthetic, even down to the ways the post and beam structure were designed. The result means the house feels secondary to the nature around it—a deliberate choice for the site—giving the home a sense that it’s light enough to melt away. 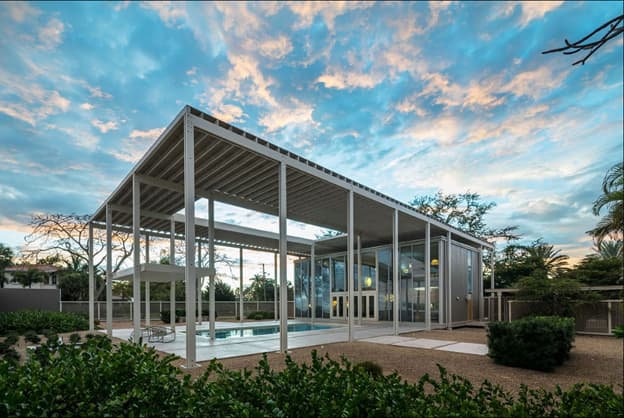 Paul Rudolph’s Hiss House, also known as Umbrella House, is another example of an open floor plan, minimal aesthetic, and post and beam construction mid-century masterwork, but it evokes a completely different feeling from the Wiley House.

Constructed in 1953, the home’s defining feature is a slatted shade structure over a central swimming pool and terraces. The shade device inspired the umbrella moniker and was borne out of the need to offer respite from the harsh Florida. The beauty, and take-away for current design efforts, is the way this functional piece becomes the defining design move of the home.

For the umbrella house, the shading IS the house. It blurs the lines between inside and out, smudges the notion of where home ends and nature begins, and through the creation of essentially a double roof that helps with cooling the primary structure, is what makes this home’s design genius. Using solutions to functional needs as the beginning, or sometimes the entire central design move is what influences every layout, elevation, and detail. In the end, it’s something that separates the “goods” from the “greats.” 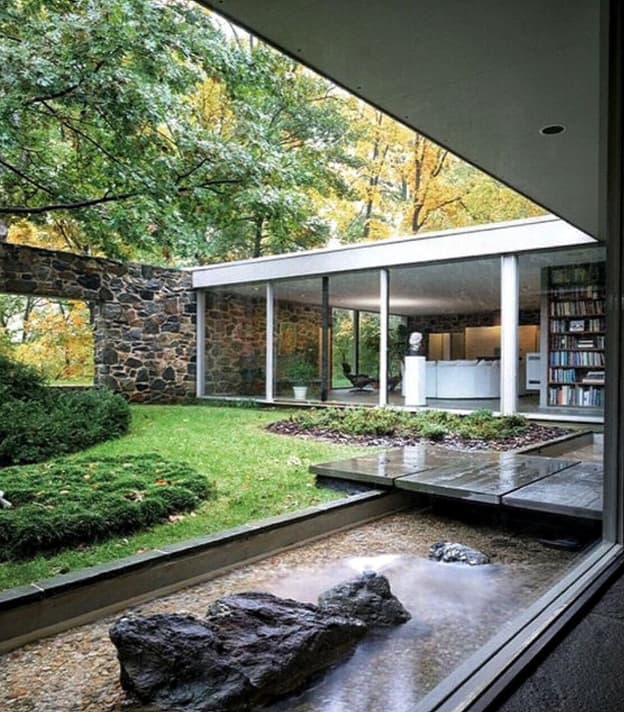 The Hooper House II in Baltimore, completed in 1959 by Marcel Breuer, is another home whose design interacts in a beautiful way to its surroundings and juxtaposes seemingly disparate materials. Like the Wiley House, the genius of its design is not necessarily how it sits within the landscape, but how owners and visitors experience nature.

For Breuer, and many other talented mid-century architects, the outdoors was treated as another element or layer of the architecture of space. At first glance the home’s layout reads as a simple rectangle, but in reality, it’s two distinct wings that surround an interior courtyard. Entry into the house is via a thick stone wall, into a glass hallway that looks onto the courtyard. The view across is to another thick stone wall that perfectly frames a view of the lake beyond.

This sort of visual play between your position in the home and your connection to the landscape beyond is classic mid-century modern, and should be another form of inspiration for all modern dwellings. That fact is only highlighted by the translucence of glass against the depth and weight of stone.

Alvar Aalto’s Muuratsalo Experimental House is not your typical mid-century home, but it’s worthy of mention and has been included because of its dedication to function and material honesty.

Constructed from 1952 until 1954 on the western shore of Muuratsalo island in Finland, the design catered to Aalto’s desire to experiment with materials, pattern, form and proportion. As a remote artist’s workshop and summer residence, the layout was inspired by the idea of an Ancient Roman atrium with a semi-enclosed courtyard, but the modern inspiration is in the honesty of materials, and even more so in using materials in ways that interact with nature. Using over 50 different bricks, arranged in unique combinations and patterns, this house highlights the juxtaposition of materials against nature and the diverse ways that a singular material can be used. 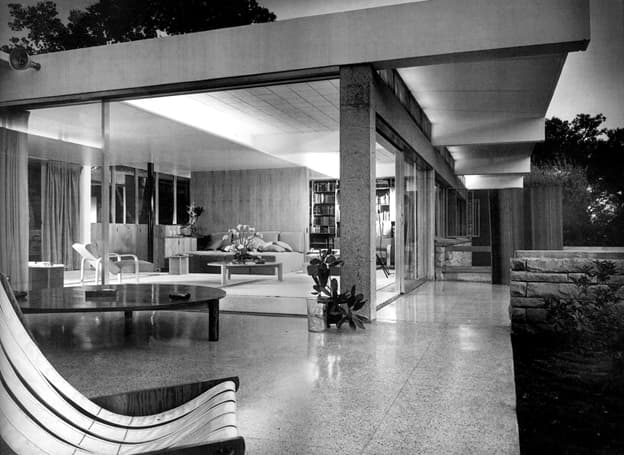 Last but definitely not least, the Tremaine House by Richard Neutra ticks the usual boxes for mid-century modern design, but this house is notable for the way it addressed functional needs through materials.

Completed in 1948 in Montecito, California, the home integrated concrete in, what had been up until that point, unusual ways: articulated concrete pillars, girders, a thin roof slab, and interior floors. What’s notable is that the concrete was expressly used to thwart fires that plagued the surrounding hills(similar to how it is used in California today) and as a robust but raw material. This emphasis and fusion of function and aesthetic is a hallmark of this architectural period that more home designs today should consider.