Pretty much anyone you ask (including most architects!) would agree that a home is more than simply the sum of its parts. It’s a place to live, a place for your family to grow, and a place for you to build your life. But that doesn’t mean that its parts—the actual materials that make up the home—aren’t important.

Architecture has always been influenced by the materials available for a given product. Simply put, the properties and availability of different materials can either constrain or enable a design. That being said, in recent years, as more and more modern materials have become available for use in residential design, it’s become possible to achieve more exciting results.

Below, we take a look at the relationship between material palette and modern architecture, and also highlight the ways in which modern materials have enabled architects to achieve even more creative results.

The Relationship Between Material Palette and Modern Architecture

While each project is of course unique, and there will always be projects which go against convention, modern architecture tends to use a relatively simple material palette compared to more “traditional” styles of architecture. This can be seen in a number of ways.

For example, most modern residential projects tend to consist of only a handful of different materials. These materials are typically used on both the interior and exterior of the home in order to create a sense of cohesion between the spaces. Using fewer materials also limits the visual “noise” that can result from having too many colors and textures clashing with each other, which might happen when more materials are leveraged.

Additionally, modern architecture tends to let the inherent beauty of a material speak for itself. This means that paint, wallpapers, and other finishes are kept to a minimum so that the natural detail in the materials being used can shine through. If a home uses wood, for example, then the beauty of the wood grain is enhanced instead of being covered over, etc. 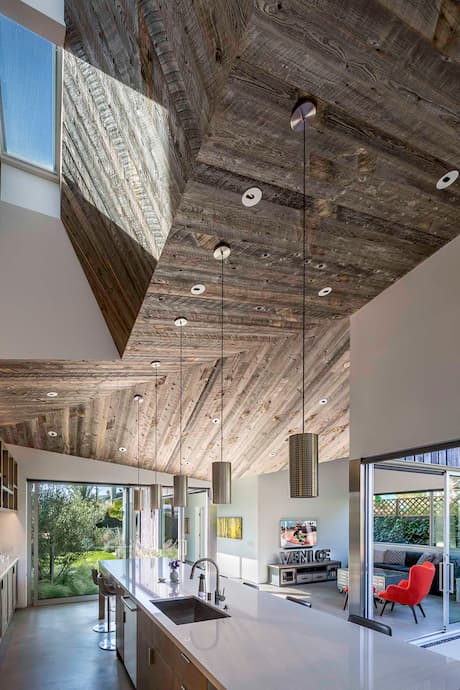 Certain materials are used rather extensively in modern architecture—so much so that they’ve become somewhat synonymous with the style.

Large expanses of glass, for example, are very common in modern architecture, as it’s a very effective means of letting in natural sunlight while also building a strong connection to the outdoors. And, as newer forms of glass and windows become increasingly energy efficient, it becomes possible to use more and more glass in a home without increasing the overall carbon footprint of the project.

Concrete is another material that is commonly used in both the interior and exterior of modern homes. While it may take on something of an industrial look and feel in some contexts, it can also facilitate interesting new forms and shapes that would be difficult to achieve with other materials.

Various metals (such as stainless steel, anodized aluminum, and zinc) are also increasingly used in modern homes, as are other metals and materials which develop a natural patina over time.

That being said, it’s important to recognize the fact that truly any material can be used in a modern home. There are no hard and fast rules that indicate a certain material must be used or that a material can never be used. Even brick, one of the oldest and most traditional of building materials, can be leveraged to stunning results.

The Impact of Modern Building Materials

As newer materials have become available, it’s become easier and easier for modern homes to be built in such a way that it meets the goals of the homeowner while still meeting environmental regulations. Newer fabrications for glass and windows (as mentioned above), new forms of insulation, etc. allows a home to be that much more sustainable compared to some older materials which had the potential to cause greater environmental harm.

Additionally, in the past, materials like ceramic tiles, marble slabs, and glass windows all tended to be smaller than they are now, for a number of reasons.

One of those reasons is that it was easier to fabricate, store, transport, and install smaller units. But as manufacturing technology has advanced in recent years, it’s become easier to create larger versions of all of these materials. That’s why you’ll often see ceramic slabs, tiles, and sheets of glass used in modern homes that are larger than their counterparts in more traditional homes. The end result is a home that seems less fussy, because there are fewer joints between each of these components.