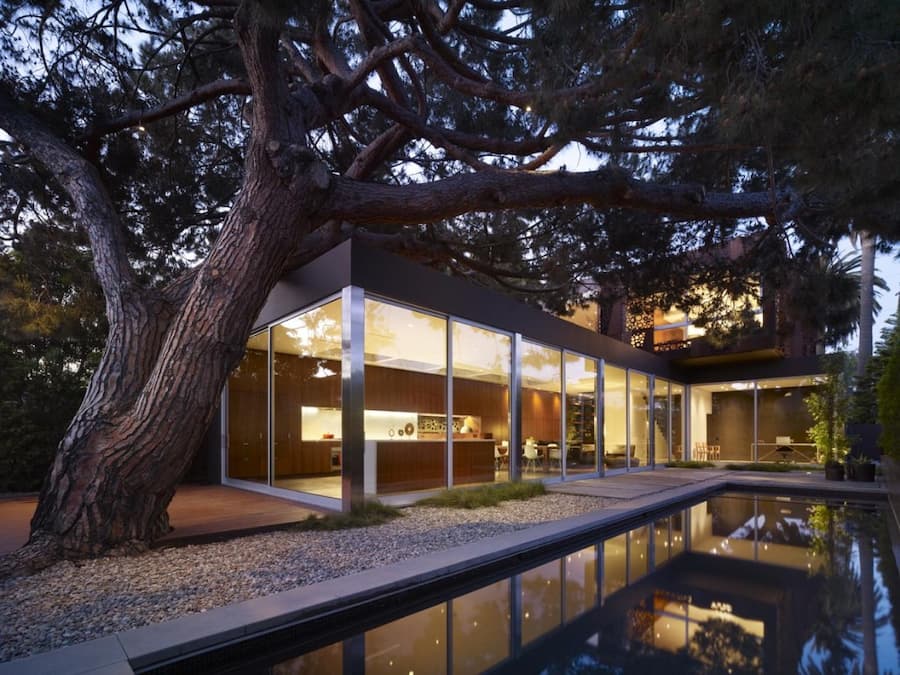 For Modal Design, the conscious decision to avoid appropriating elements from existing projects favors abstractions of the essence of historical precedents. This approach of reinterpreting rather than borrowing, we feel, imbues our work with a fresh perspective. The Walnut House, a custom residence designed for a forward thinking, open-minded client in a residential neighborhood in Venice, California, is an excellent manifestation of this methodology.

With three bedrooms and two and a half baths over 2,700 square feet, the Walnut House’s design can be thought of as a “collision of opposites.” By juxtaposing materials, framing views in and out, textured and smooth surfaces, solid and perforated forms, nature and architecture, the house offers its owners a multi-layered experience characterized by a richness that is only fully revealed over time and by moving through the project. The following is a discussion of a few of those layers.

A characteristic of Modal Design’s work, one that is exemplified in this house, is that the concepts of system and design are inextricably linked; system is the generator, or device for producing the design. Program, materials, and building systems are not forced on the design, but the design results from innovative interpretations of the requirements of program. Rather than dictate, systems offer freedom. 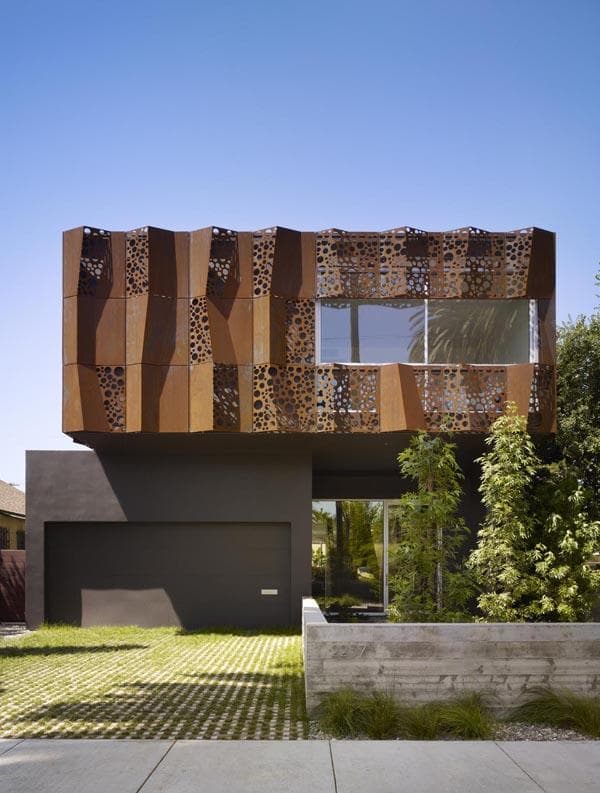 When the design of this home first began, one of the earliest considerations was the system that would be used in construction of an exterior screen, a defining element of the home. As the firm began to study the screen’s pattern, material and relationship to the structure behind, it became apparent that developing a rigorous system that would achieve the desired effect within a manageable budget was going to be a requirement. What might have been construed as a limitation became a liberation as the firm evaluated the system and what the system could contribute to the design. The folded, perforated COR-TEN steel envelope is the first thing visitors notice when approaching the house from the street. As this screen ages and weathers, it will develop a beautiful rust-colored patina, reinforcing the concept of the house as a living architecture that changes over time.

The Walnut House is designed to coexist with nature in unexpected and inventive ways; a connection that is reinforced by the choice, placement, and function of the materials. The folded steel on the exterior is textured, perforated, and multi-colored and is a sharp contrast to the clean, white, rectilinear walls of the house’s interior. The lacey, organic nature of the steel panels further accentuate the geometric severity of the interior walls and vice-versa. The pairing of these diverse elements has the effect of reinforcing the particular qualities of each.

Modal Design prides itself on being particularly attuned to the unique and varied site-specific light that defines a location. In the design of the Walnut House, the intention from inception was to exploit the clear, intense sunlight of Southern California. Because this light is so plentiful, it is often taken for granted by longtime residents of the area. The design employs several methods to alter light and give it an almost sculptural quality and call attention to it. The COR-TEN steel casts shade and shadows on the façade that lengthen and shrink according to the time of day and degree of cloud cover. The numerous round holes of various sizes punctured in the steel screen creates a staccato effect of the natural light that penetrates the interior, casting shifting patterns of light and shade on the walls and floor throughout the day. As a result, the architecture, like nature, appears to be in a constant state of change. 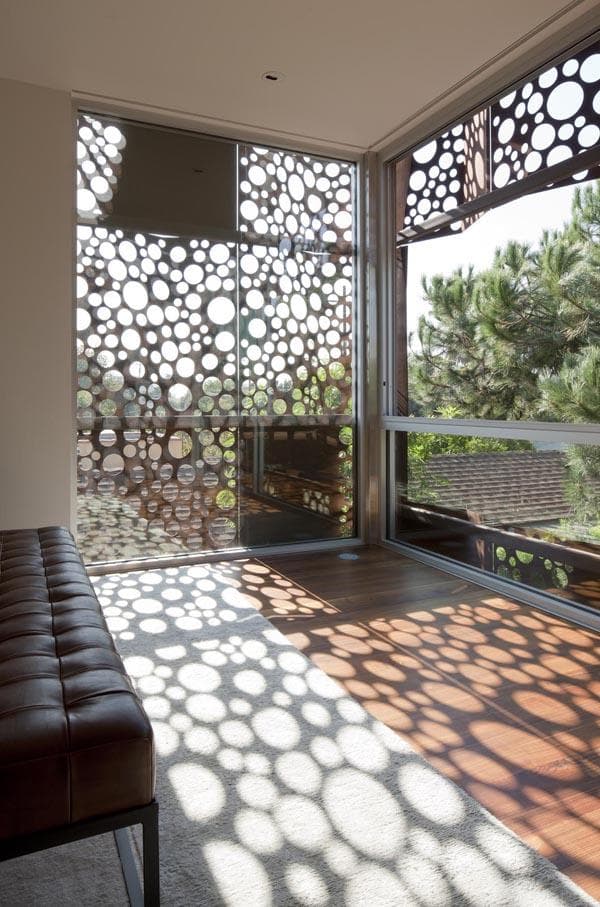 MOVEMENT AS A MEANS OF COMPREHENSION

The Walnut House can be best understood only by moving through the space and even then, only after several visits. Starting at the front door, components of the design unfold slowly as you move deeper into the house. The entire ground floor is an open plan with kitchen and living room flowing into one another while the second story, where the bedrooms are located, is a more traditional floor plan offering more privacy. The enormous tree in the back yard that has been part of the site for nearly a century is revealed in stages, only seen in its entirety from the back yard. From the entrance, just a portion of the massive trunk is visible while shadows from the branch structure and needles fall across the interior walls and ceiling; further evidence of the tree’s scale. The juxtaposition of the tree and the white-walled, high-ceilinged, rectilinear space enhances the characteristics of both, emphasizing their differences and actively engaging nature. By merely hinting at the existence of the tree, anticipation and curiosity are increased. In the living room, five-foot wide floor-to-ceiling glazed panels open to the backyard and pool, creating a nearly transparent physical barrier between interior and exterior. When opened, natural ventilation cools the interior. The circulation that dictates movement is also designed as a critical part of the experience of the home; neither accidental nor comprised of leftover space, but carefully orchestrated to reveal and conceal, to offer— and at times, withhold — information. The design intentionally frames the views both out of and into the house.

The Walnut House — like Modal Design’s philosophy or critical framework — is a true representation of a “collision of opposites.” By juxtaposing materials, framing views in and out, textured and smooth surfaces, solid and perforated forms, nature and architecture; he has succeeded in designing a house that has many layers, literally and metaphorically. The design and the experience are complex and characterized by a richness that is only fully revealed over time and by moving through the project.